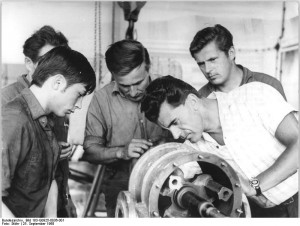 Back in the Day

When youth in olden days achieved the status of craft workers, they became important members of  society. Their prestige in England centuries ago is reflected in a dialog from  the Red Book of Hergest, a 14th-century Welsh Bardic manuscript:

“Open the door! “I will not open it. “Wherefore not? “The knife is in the meat, and the drink is in the horn, and there is revelry in Arthur’s Hall; and none may enter therein but the son of a King of a privileged country, or a craftsman bringing his craft.” 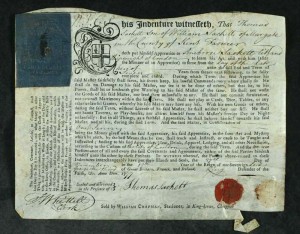 An examination of surviving contracts reveals that there was no set duration of an apprenticeship. Some contracts specify a certain number of years, such as four or six or seven. Others say the apprenticeship will last until the boy reached twenty-one, no matter his age at the start. In the example above, Thomas Sachett was apprenticed for seven years. Evidence suggests that family apprenticeships—a man training a son or a younger brother—tended to be shorter than average. Occasionally a girl was apprenticed.

These indentures were commonly written twice on a piece of paper that was torn or raggedly cut in half so that the two copies could be matched together if the contact was ever disputed.  The term “indenture” refers to this ragged edge.  The document was witnessed by the parties involved (usually the master and the father of the apprentice) and other respected members of the community.  The indenture made the master responsible for the apprentice, and the apprentice became more or less a servant living in the master’s house until the term was up (usually seven years).  Often an additional journeyman year was also listed, during which the apprentice had to make a masterwork in their spare time and with their own money.

After the apprenticeship was completed, the young person could work for wages as a journeyman or, if he had the means, set up on his own as a master craftsman. A master was a tradesman who had his own shop. A master was not necessarily more skilled than a journeyman; the term indicated that he worked for himself rather than for wages. Some trades, like barbers or bookbinders, required relatively little investment in tools and overhead to set up one’s own shop. Others, like cabinetmakers or goldsmiths, required a good deal of start-up capital, making it difficult for a journeyman to become a master.

A Backgrounder on Apprenticeship Training in Canada

Expressed in the simplest terms, modern-day “apprenticeship” refers to a form of vocational training in the skilled trades that is primarily undertaken “on the job” under the supervision of certified journeypersons. During the training period, apprentices are paid employees of the organization providing the training. Alongside workplace instruction, apprentices receive a portion of their training in a classroom environment. On average, 80% of the apprentice‟s two- to five-year program is spent in the workplace; the rest is spent at a training institution. At the completion of an apprenticeship program, the apprentice writes a series of exams and is certified as a journeyperson in his or her trade.